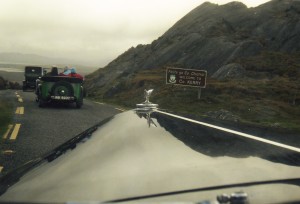 The Rose of Tralee Run took place in August 1979

After which Tom Twohill and PJ Rordan decided to form a club as there seemed to be an interest in the county.

In sepetember 1979 the the Kingdom Veteran Vintage & Classic Car Club was formed.

All those who took part where awarded with a small trophy now a rear item.