FOUNDATION OF THE CLUB

Click on picture to read Extract from ‘The Kerryman’ Friday, November 2, 1979

The “Rose of Tralee Run” took place at the end of August 1979 and had a stop at the Castleross Hotel in Killarney. During that stop the late Tom Twohill suggested to P.J. O’Riordan that there was enough interest in vintage cars in Kerry to form our own club. Enthused by the suggestion P.J. seized on the moment and called a meeting of those interested to take place a few weeks later at Farranfore Airport.

In September 1979 a group of enthusiasts gathered together and formed The Kerry Veteran Car Club. The group then embarked on the club’s first run which left the Airport and toured Firies-Currans and the surrounding area before returning to the Airport. There are reports of all sorts of calamities along the route with tempers fraying and cars expiring! 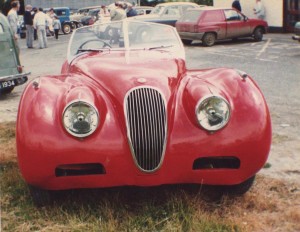 Those who survived the experience were rewarded with a trophy for their efforts, by now a prized possession.

Some of those present at that Founders Meeting were: