Credits to: Fintan Foley Former Club Chairman for article and pictures.
This article was originally written for Model T club of Ireland.

I first got to know P.J. in 1990 when I bought my first vintage vehicle a 1942 Morris 8 “Z” PO Linesman Van and I had thoughts of moving from the fast lane where I had been rallying for many years to the more social and slower lane of vintage cars. I was surprised to find that many of my rallying colleagues had made the transition before me and I felt very much at home in the company of great rallying people like Paddy O’Callaghan, Gerry Brown, and Pat Hourigan (Paddy Duckham). But one figure towered above all the rest P.J. (the General) who ran the show. P.J. was nicknamed “The General” by his good friends Jimmy Bohan and co. and Kevin Meaney from Carrigaline wrote a poem about P.J. called the General. 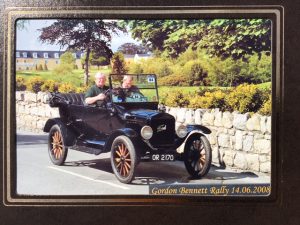 This Gentle Giant was everywhere Ambassador for the Kingdom Veteran Vintage & Classic Car Club, meeting and greeting friends as they arrived for the Kerry runs and turning chaos into order as he organized and presided over what were to become legendary social events on the national vintage scene. Needless to say he was fascinated with my vintage van and he made myself and Kay so welcome to the club, introducing us to the many good friends we hold so dear to this day. In later years when I travelled out with P.J. to events around the country I realized I was in the company of an extraordinary man, a legend in Irish Vintage Circles and everywhere we went people came over to greet him and say hello.

Time moved on through the 90’s and we became great friends enjoying his company and that of his soulmate and lovely wife Noreen. Then in 2000 P.J. having been at the helm of the club for 21 years decided he wanted more time for himself to play some golf among other things (at the newly opened nearby Ardfert Golf Club). It’s a long story which I won’t go into now, but the bottom line was I ended up taking over the reins of the club from P.J. and was lucky enough to have a great Secretary in Mike O’Connor. I had only one condition and that was that P.J. would remain on in the club to ensure a smooth transition and guide us with the benefit of his wisdom and experience. Of course, he readily accepted that condition and took on the role of Treasurer and remained the heart and soul of the club very much until his recent sad passing. In 2002 following the death of his great friend club President and founder member Tom Twohill, P.J. accepted the position of Club President a role he held with pride and dignity to the end. Despite suffering some health issues in recent years he turned up at the club runs, Bus trips to the Classic Car Show at the RDS and was at the Club AGM in February and the Club’s Social a few weeks later where he was in great form when he accepted “A Lifetime Achievement Award” from the club. 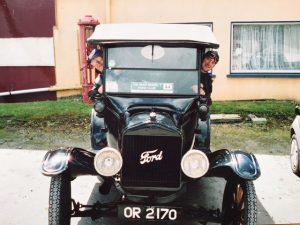 Enter the “Model T” years. P.J. was a great lover of cars and his garage at the rear of the house was an Aladin’s Cave for any car enthusiast. On the many visits to his house both social and club related once Noreen had provided the customary lovely cup of tea we inevitably ended up in the garage sometimes drinking the mug of tea there. Lingering in the corner up on blocks was the Model T. This was his pride and joy but hadn’t been on the road for several years. His face lit up as he talked about his Black Beauty and how he was meant to have it with the OR 2170 reg. sure the “OR” is for O’Riordan he enthused. Apparently, the original owner who was a Vet in Connemara brought it back from England with him back in the 30’s? and at that time you were allowed retain the U.K. reg. which was issued on the old Irish Brown logbook. Noreen and P.J. delighted in telling me about restoring the Model T and Noreen spent hours with paint stripper and sand paper which brought the blood to the tips of her fingers as they stripped and lacquered the wooden wheels, it was clearly a labour of love which they both enjoyed. As we looked at the Model T he said there’s one thing I always wanted to do “The Gordon Bennett”, I’d love to do one before time runs out on me. I need someone who could handle the maps, will you do one with me? How could I refuse!

And so, the plan was hatched. We made a list of the work needed to get OR back on the road and we got it down of the blocks and set about the task.

Now I would be well able to set-up a pair of Webber Carburetors from my rallying days, but a Model T was a totally different ball game. The ignition had trembler coils which were missing but were eventually located in Noreen’s hot-press. It needed two new tyres and some other bits and pieces which he located from the Model T fraternity. P.J. did most of the work himself, no doubt with Noreen brewing up the tea and I’m sure Pádraig and his young grandson David were looking over his shoulder and handing him the spanners, I helped out when I could and before long OR was back on the road. We did our first test run on a Friday evening KVVCCC club run and it was then I realized you needed to be an Octopus to drive a Model T, as 2 hands and 2 legs wouldn’t do. You needed 2 hands for the steering wheel and then there was the throttle lever and advance/retard on the steering column, there was no gear stick but a handbrake style lever standing-up by the driver’s side which selected the 2 forward gears neutral and combined a sort of handbrake linked to one of the 3 pedals on the floor. The 3 pedals on the floor are not your ordinary car setup either, 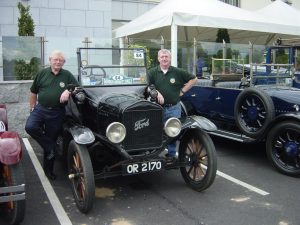 the center one you must stand on while in reverse and make sure you have the big lever in the right position. As for brakes I reckon I have better brakes on my pedal racing bike. All of this was no bother to P.J. and I quickly realized what a superb experienced Model T driver he was. With the hood down and flat out at 40 mph. I had a smile on my face and enjoyed this totally new driving experience. We did the Gordon Bennett in 2008 and went on to complete two more in ’09 & 2010.

We did the Henry Ford International Run in Cork 2008? And one or two moments stand out from that wonderful event. I recall this because of one or two incidents that we looked back on and laughed at many times. It was a marvelous event and superbly well run with a Lord Mayor’s reception in the City Hall before we set off. I was navigating as usual and was warned by P.J. to pay close attention to the instructions at the briefing given by Bill Cuddy? (P.J. was probably busy grabbing another glass of Champagne). I listened attentively and remember noting in my mind a warning to make sure we had plenty of petrol in the tank as there was a steep driveway up to the house where we were having lunch. I later understood that the Model T has a gravity petrol feed from the tank located under the seat to the 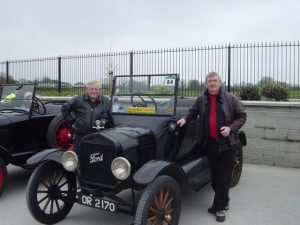 carburetor. All went well and we had a lovely lunch and the following morning we headed off to West Cork via Bandon. Somewhere in the afternoon we were on a narrow steep hill when the T calved and stopped on the hill. Panic, I had to jump out and put the wheel chock to the wheel and P.J. started fiddling with the lolly pop sticks at the trembler coils and fiddled around under the bonnet. Meanwhile quite a build up of traffic had gathered behind us and we noticed some very well-dressed ladies and gents out on the road on their mobile phones., “there must be something on P.J. muttered”. I asked, “have you enough petrol in the tank Cuddy mentioned something about petrol and steep hills yesterday” (what would I know!), P.J. growled back at me “of course I have enough petrol I checked it earlier myself” (with his calibrated stick fuel gauge). All else having failed I persuaded him to lift the seat and sure enough we were low on petrol, luckily, he had a ½ Gerry Can and we put in 2 gals.in and the T came back to life. We jumped in and to a tremendous round of applause from the assembled crowd we led the line of cars over the top of the hill and as we descended down the other side there was the Wedding Party Bride and all out on the road outside the Church awaiting the Groom who was in the traffic jam behind us. We were clapped and cheered on our way and had many a good laugh recalling the incident.

The other incident happened the following day way down near Schull we were motoring well flat in top when we approached a narrow stone bridge and saw a car approaching from the other direction, the assumption was that it would stop but it didn’t and I knew there was no way of stopping the “T”, I thought it was all over!. To this day I will never know how the two cars passed on that Bridge, but it was a great tribute to P.J.’s driving skills that he held his nerve and steered through the narrow gap with a mere hairs breath either side of the “T”. I will always remember his comment afterwards “Damned Yanks in a Hire n Drive”

I could write a book of our times together, a Wonderful Character, a Legend in is his own time, a Gentle Giant but one of Life’s True Gentleman. Sadly, our 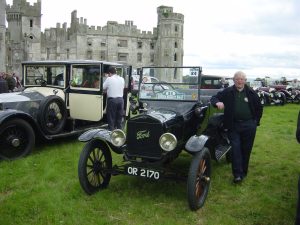 adventures together will be no more, but I will treasure the memories, and I was so privileged to travel alongside this extraordinary man for a little bit of his journey through life.